If you take Washington Avenue in downtown Montgomery, you will notice some major changes.  A portion of the road, from South Court Street to South Lawrence Street, has changed from a one-way to a two-way street. 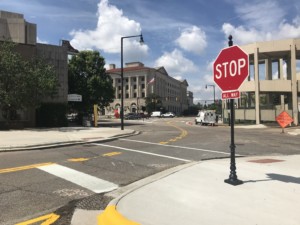 Michael Breen works near the intersection of Washington Avenue and South Court Street, which is now an all-way stop.  He has mixed opinions on the project.

“Now with these changes with the two-way street, it’s even harder for me to get out of the parking spot that I usually take here at the back of the store,” he shared.

With business in mind, he’s hopeful this could mean more foot traffic.

“I think it might help to some degree, just because there will be more parking spaces, more opportunities for people to get out of their car and walk around,” Breen added.

Wesley Cox with the City of Montgomery says they’re trying to make this change as smooth as possible.

“We’ve tried to sign real well at all the intersections, double indicating where it is still one-way,” he said.

According to Cox, there are plans to turn more one-ways into two-ways in downtown Montgomery, which he says would help downtown storefronts.

“Providing easier access for people who want to park downtown on the street, get out and walk around, and not necessarily driving to get to a spot specifically,” Cox added.

If you have concerns about the project, reach out to the City of Montgomery by calling 3-1-1.