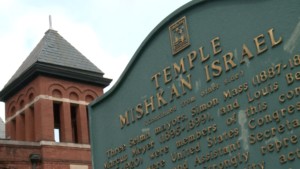 Efforts are underway to raise money to restore a historic Jewish synagogue in Selma.

The congregation at Temple Mishkan Israel is working to raise $800,000 dollars for a major restoration project.

Congregation president Ronnie Leet says the money would be used to restore the 120 year old building — and set it up as a museum.

He says the museum would tell the story of the Jewish community in Selma.

Leet says the building would also remain as a place of worship.

He says currently there are only four active members of the local congregation.

“You know at some point in time if we don’t make this move then of course the building will close up,” said Leet.

“We’ll have to extract our beautiful stained glass windows, sell or giveaway our beautiful torahs and the building will become storage or just fall in and we don’t want that. We have too much history, too much love for this temple.”

Leet says a go-fund-me page has been set up at gofundme.com/temple-mishkan-israel.

US manufacturing shows further improvement in July with an ISM reading of 54.2