Multiple Arrests Made at Alabama Prisons

The Alabama Department of Corrections (ADOC) has charged a former correctional officer with using his official position for financial gain following a two-year investigation. 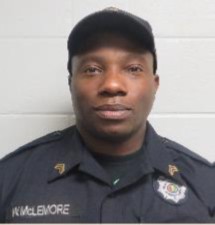 After extensive collaboration with the St. Clair County District Attorney, on June 27 agents assigned to the ADOC Investigations and Intelligence Division arrested Willie Gene McLemore, Jr., 36, of Springville, for receiving money in exchange for smuggling illegal contraband inside the St. Clair Correctional Facility in Springville. Using financial forensics, ADOC agents discovered evidence that showed McLemore had received electronic transfers of money into his personal bank account that was traced to an inmate’s criminal activity inside the prison.

“Today’s news reflects our Department’s commitment to holding correctional officers to the highest standards of integrity. Through the Department’s use of state-of-art investigation techniques designed to combat corruption, this arrest is the culmination of reviewing hundreds of financial documents over the past 24 months,” said ADOC Director of Investigations and Intelligence Arnaldo Mercado. “Our agents’ training in financial forensics enables them to use investigative skills to detect and eliminate illegal financial activity coming from both inside and outside our correctional institutions.”

Following the arrest, McLemore, who had been with the ADOC since 2013, immediately resigned from his position.

In a separate incident on July 2, the ADOC apprehended two suspects after each attempted to smuggle contraband into the Ventress Correctional Facility in Clayton.

Jeannie Elizabeth Weaver, 23, and Shane Clover McKennon, 24, both from Fort Mitchell, were arrested and charged with promoting prison contraband. The suspects were taken to the Barbour County Jail and booked.

The public should contact the ADOC Investigations and Intelligence Division at 1-866-293-7799 with information that may lead to the arrest of anyone attempting to introduce illegal contraband into state prisons or to report any criminal activity that could be taking place at any of the state prisons. The public may also report suspicious activity to law enforcement by going to the ADOC Website at  http://www.doc.alabama.gov/investigationrequest.