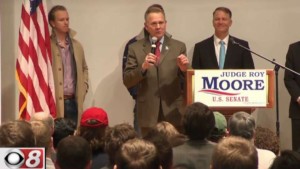 Republican Roy Moore has raised less than $17,000 so far in his newest U.S. Senate race.

Moore this week reported raising $16,693 since announcing his candidacy four weeks ago and trails almost all other candidates in fundraising.

Incumbent Democratic Sen. Doug Jones has raised the most. He brought in $2 million last fundraising quarter and has a campaign balance of $4.2 million.

Moore was the Republican nominee for the Senate seat in 2017 after he defeated a better-funded primary candidate. He lost the special election to Jones.