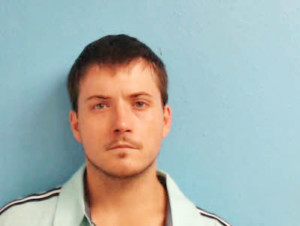 A Freeport, Fla., man is being held in the Covington County Jail on a $13,000 bond after attempting to elude police. He is also being charged with shoplifting.

The Andalusia Police Department responded to a shoplifting report from a local merchant Thursday afternoon. The merchant provided a description of the suspect’s vehicle, a red Toyota Celica with Florida license plates.

The APD’s Sgt. Don Jordan observed a vehicle matching the description of the one in which the suspect left the scene, and began attempting to stop the vehicle near the intersection of the bypass and East Three Notch.

The driver accelerated, even though the officer was pursuing with lights and sirens. Other officers joined Jordan in his effort, and the vehicle was stopped at the intersection of East Three Notch and Stanley Avenue.

Occupants included Alec Chase Sullivan, 28, of Freeport, and his mother. When officers searched him, they recovered several items with the merchant’s sales stickers still on them.

The APD impounded the vehicle, and Sgt. Jordan completed an inventory, which revealed several items with merchandise stickers. The local merchant who had reported the shoplifting came to the scene and identified the items taken from the store.

The items totaled more than $750. Sullivan was charged with one count of theft of property third and one count of attempting to elude law enforcement. He is being held on a $13,000 bond.

Proposed Bill Would Speed up the Death Penalty Process