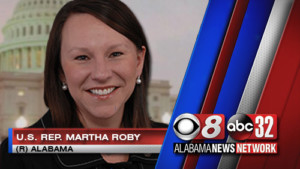 U.S. Rep. Martha Roby (R-Alabama) has announced she will not seek re-election to a sixth congressional term in 2020. She released the following statement on her website:

“Riley and I, and our children, Margaret and George, will be forever grateful to the people of Alabama’s Second District for giving us the tremendous privilege and honor of serving our state and country.  Throughout my five terms in Congress, I have cast every vote with the guiding principle that Alabama always comes first.

“Together, we have been able to deliver some incredible results for our military, veterans, agriculture community, and the unborn.  We are not finished yet.  While my name will not be on the ballot in 2020, I remain committed to continuing the fight for Alabama and the people I represent until I cast my last vote on the floor of the United States House of Representatives.

“As we prepare to close this wonderful chapter, I extend my sincerest thanks to my husband, our children, our parents, families, friends, congressional colleagues, and staff, who all made our important work possible and offered their support every step of the way.”

Roby was first elected to Congress in 2010, defeating one-term Democratic Congressman Bobby Bright.  Bright had been Montgomery Mayor when Roby was on Montgomery City Council.

U.S. Sen. Richard Shelby (R-Alabama) released this statement on Twitter about Roby: “Martha Roby has done a great job representing AL’s 2nd Congressional district over the last 8 years. She began as an intern in my office & went on to be instrumental in helping our veterans, bringing the F-35 to Montgomery, & many other significant wins. I wish her all the best.”