Major Milestone in Fight Against Blight

Montgomery city leaders have tackled the issue of abandoned and vacant homes for three years now, and today they reached a major milestone. 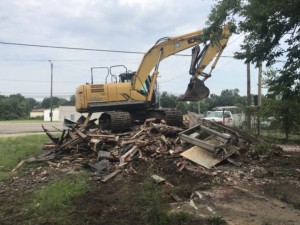 A home on Mobile Highway was the 435th to be demolished as part of this effort.  City leaders have modernized how they find abandoned homes needing demolition, using already existing city records, like utility accounts and building permits, to pinpoint these homes without even leaving city hall.  They’ve also set aside more funding, with an expected half a million dollars in the 2020 budget.

“Nobody along this stretch here wants this thing in their backyard and to the extent that we can have a nice level meadow, somebody is going to want to come in and bring something new,” explained Montgomery Mayor Todd Strange.

City leaders say abandoned homes are an eyesore in neighborhoods and can lead to crime and declining property values.  The city has identified 300 more homes that may be demolished in the near future.