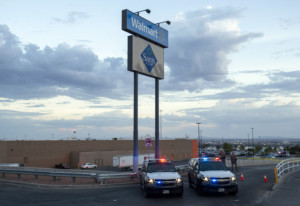 Texas state police cars block the access to the Walmart store in the aftermath of a mass shooting in El Paso, Texas, Saturday, Aug. 3, 2019. Multiple people were killed and one person was in custody after a shooter went on a rampage at a shopping mall, police in the Texas border town of El Paso said. (AP Photo/Andres Leighton)

Police in El Paso, Texas, say 20 people have been killed and 26 others hurt when a man went on a shooting spree inside a Walmart store.

The gunman has been identified as 21-year-old Patrick Crusius. He was taken into custody.

CBS News: What We Know About The Suspect

Police say the store had up to 3,000 people inside, many doing back-to-school shopping.

University Medical Center of El Paso told CBS News it had received 11 shooting victims, including one who died. They said a 4-month-old child was among the patients it was treating.  A spokesman said two children, ages 2 and 9, were transferred to El Paso Children’s Hospital.

Del Sol Medical Center told CBS News it was treating 11 patients from the shooting. It said seven were in critical condition, and two were stable. The patients ranged in age from 35 to 42.

Alden Hall told CBSN he was in the Walmart when he saw the shooter wearing a black T-shirt, black glasses and “military-grade” ear protection. Hall, who served in the military, said he thinks the gunman had an AK-47.

Hall said the gunman shot at him and another man, who fell on the ground. He said he saw 13 people injured and one who he thinks was shot dead. Hall shot video of the parking lot outside the store, showing first responders transporting injured people in shopping carts.

Walmart released a statement, saying it was working with law enforcement and “praying for the victims, the community & our associates, as well as the first responders.”

Mr. Trump later tweeted condemning the shooting, calling it “an act of cowardice.”

“There are no reasons or excuses that will ever justify killing innocent people,” the president wrote. “Melania and I send our heartfelt thoughts and prayers to the great people of Texas.”