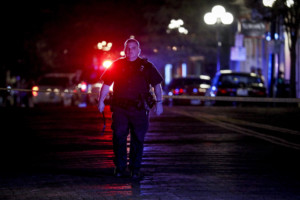 Authorities work at the scene of a mass shooting, Sunday, Aug. 4, 2019, in Dayton, Ohio. Several people in Ohio have been killed in the second mass shooting in the U.S. in less than 24 hours, and the suspected shooter is also deceased, police said. (AP Photo/John Minchillo)

Early this morning, nine people were killed in a nightlife area of Dayton, Ohio, in the second mass shooting in the U.S. in less than 24 hours.

At least 26 others were hurt. There is no word on their conditions.

Police say the suspected shooter was shot and killed.

She says Dayton police officers patrolling the area fired on the shooter within a minute, killing him. She said “hundreds of people in the Oregon District could be dead today” if police hadn’t acted quickly.

Police haven’t named the suspect or revealed a motive.

The shooting happened outdoors in an area called the Oregon District, that has many restaurants, bars and theaters. A police spokesman described the district as “a safe part of downtown.”

President Trump is saying that federal law enforcement is working with local authorities to investigate.Trump tweeted praise of law enforcement and said that “information is rapidly being accumulated in Dayton.”

Just days before, on July 28, three people were killed, including two children, at the Gilroy Garlic Festival in California.

The shooting in Dayton is the 22nd mass killing of 2019 in the U.S., according to the AP/USA Today/Northeastern University mass murder database that tracks homicides where four or more people killed — not including the offender. The 20 mass killings in the U.S. in 2019 that preceded this weekend claimed 96 lives.
Categories: National News, News
Tags: dayton ohio, dayton ohio shooting, Mass Shooting, mass shooting 2019, mass shooting u.s.