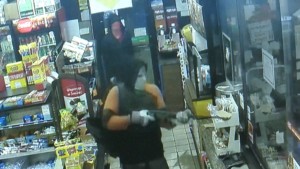 The Dallas County Sheriff’s Office needs your help to catch a pair of armed robbers.

The robbery was caught on tape — and investigators are hoping the public — can help identify the suspects.

Deputies are searching for two men who robbed the Marathon gas station and convenience store located on the 4100 block of Highway 80 East — in Selmont.

Cole said the robbers got away with an undisclosed amount of cash. He says the robbery was captured on video — by the store surveillance system.

“Once they entered the store there were several rounds fired. It appeared to be a .22 caliber long gun. Those projectiles were found outside in the cashiers car. That projectile will be submitted to the lab for analysis,” said Cole.

“Investigators have released the video — and are asking the public for any information — that could help them ID the perpetrators.

Anyone with information call investigators at the Dallas County Sheriff Office at (334) 874-2578.