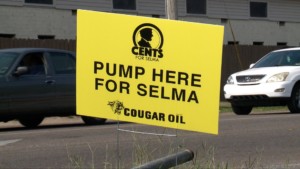 A Selma-based oil company is donating a portion of it’s profits — to non-profit groups — that are working to make a difference in the community.

Cougar Oil Company in Selma is donating 5% of profits made at the pump from each of its five store locations to local non-profit groups that are making a positive impact in the city.

“We’re doing this every month. The first 2 months we’re donating to the Cemetery Preservation Group. And from there we’re just going to just look around at other groups that are also making a difference around Selma, other non-profits that we can partner with.

Doug Buster is the President of the Cemetery Preservation Group — a Selma non-profit — staffed by volunteers — that’s dedicated to repairing and preserving historic cemeteries.

“Primarily due to the city layoffs, these cemeteries have really gotten into bad shape so we’re trying to fill a need here,” said Buster.