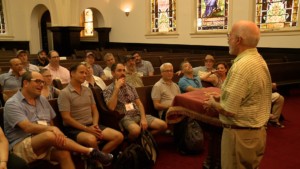 The Central Conference of American Rabbis toured historic sites around Selma Tuesday — all in an effort to promote racial justice.

Fifty Jewish rabbis from around the country are visiting Selma for a summit on slavery and racial injustice.

They’re here to get a first hand look at Selma’s role in the struggle for racial equality.

And they plan to take what they learn from the experience — home — to share in their communities.

“And how we can move this country forward through our communities, through education to really confront the history of slavery and the history of racism and to see if we can create a better future,” said Rabbi Hara Person.

During their visit the rabbis went on a guided tour of the Selma Voting Rights Movement.

After their tour — the rabbis also took in some of Selma’s Jewish history.

“We’re just honored that the CCAR group found time to come to Temple Mishkan Israel while on their tour of Selma, Alabama,” said Ronnie Leet.

With only four active members in the local congregation at the synagogue.

There are efforts now underway to raise money to restore the temple — and turn it into a museum.

The group is also touring museum and historic sites in Montgomery.