The Montgomery Police Department says they are aware of several reports of people being approached in shopping areas and being asked for money.

MPD posted via Facebook to warn the public saying:

“Many of the reports are identifying a black female as approaching shoppers as they walk to their vehicle and becoming aggressive when they don’t provide her with money. There have even been reports of patrons being followed to their residence. The incidents have largely occurred in the Eastchase area, but shoppers throughout the Montgomery region should remain vigilant while shopping and immediately contact MPD to report any suspicious activity. If you believe you are being followed, do not go to your residence and drive to a public location or a police precinct and report the activity to the Montgomery Police Department.”

One concerned citizen publicly posted her encounter via Facebook to warn others. The post has now been shared over a thousand times. 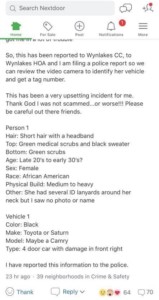