MORE HOT WEATHER: The ridge continues to hold over the state and our Friday will feature a mostly sunny sky and hot temperatures with highs around 100°, which would be a record as the current record for today is 97° set back in 1991. Of course, during the afternoon hours we will watch the radar for a few random, afternoon storms, but as we have seen each day, these will be few and far between. Also, as we’ve seen recently, where storms do do pop-up, they will produce a lot of lightning, gusty winds, and intense rainfall. Rain chances are only around 10% today.

FRIDAY NIGHT LIGHTS: The sky should be mostly clear for the high school games tonight, with temperatures falling from around 90° at kickoff, to near 80° by the final whistle.

THE ALABAMA WEEKEND: Big changes in the forecast for late in the weekend and into early next week as it looks like the tropical feature in the Bahamas will stay to the east of the area, meaning lower rain chances and continued hot temps. Saturday and Sunday will feature more sun than clouds, showers and storms will be widely spaced with highs in the mid 90s.

FOOTBALL WEATHER: Tomorrow, Alabama travels to Columbia to take on South Carolina (2:30p CT kickoff)… the sky will be partly sunny with a kickoff temperature close to 90 degrees, then falling back slightly into the upper 80s by the fourth quarter. A few widely scattered showers are possible the region during the game.

Auburn hosts Kent State tomorrow evening at Jordan-Hare Stadium (6:30p CT kickoff)… we can’t rule out the risk of a passing shower during the game, otherwise mostly fair with temperatures falling from around 88 at kickoff, into the low 80s by the game.

POTENTIAL TROPICAL CYCLONE NINE: At 500 AM EDT, the disturbance was centered near latitude 24.6 North, longitude 75.2 West. The system is moving toward the northwest near 6 mph, and this general motion is expected to continue with some increase in forward speed through the weekend. On the forecast track, the system is anticipated to move across the central and northwestern Bahamas today, and along or over the east coast of Florida Saturday and Saturday night. 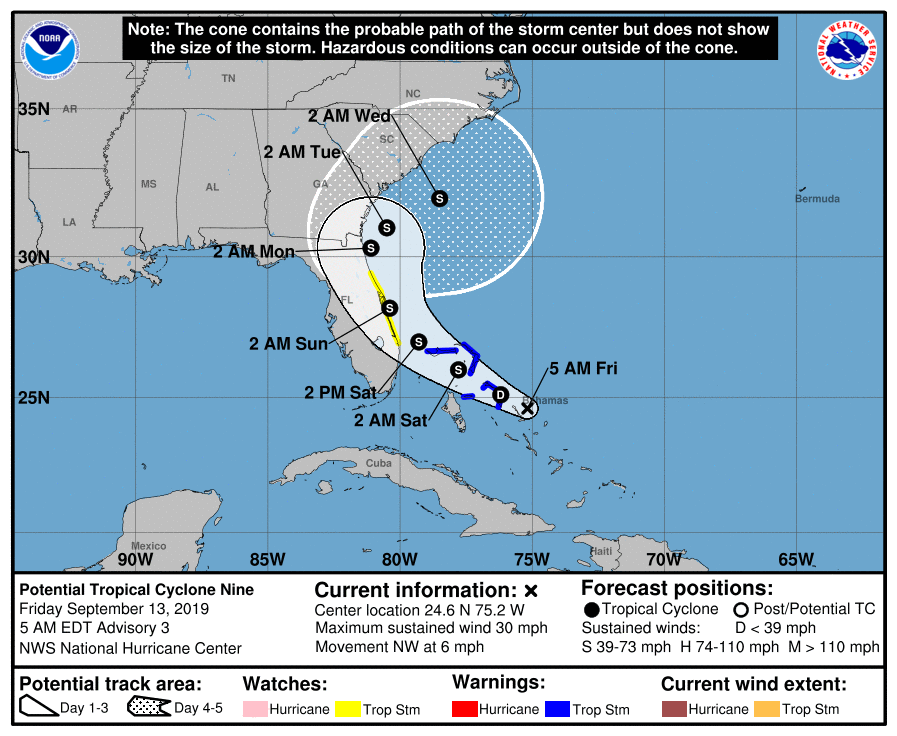 Maximum sustained winds are near 30 mph with higher gusts. Some strengthening is forecast during the next 48 hours, and the disturbance is forecast to become a tropical depression or a tropical storm during the next day or so. Environmental conditions are favorable for a tropical depression or tropical storm to form within the next day or two. Formation chance through 48 hours…high…80 percent Formation chance through 5 days…high…90 percent The estimated minimum central pressure is 1009 mb (29.80 inches). This should become Tropical Storm Humberto over the weekend.

NEXT WEEK: With the gradual shift east of the tropical feature, our weather looks to mainly sunny and continued hot for much of next week. We are forecasting highs in the mid 90s each day with a few afternoon showers and storms. However, this forecast depends completely on what the system in the Bahamas does in the coming days. If it were to shift back to the west some, we would increase our rain chances, so we will be watching this as we head through the weekend. 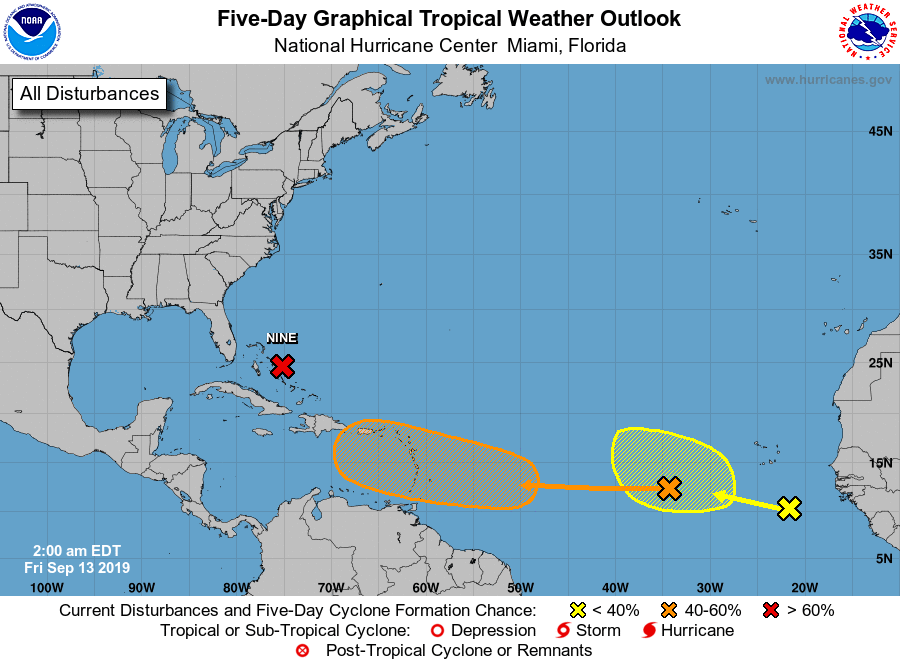 ELSEWHERE IN THE TROPICS: A tropical wave located several hundred miles west-southwest of the Cabo Verde Islands is currently producing limited and disorganized shower activity. Conditions are expected to become more conducive for development in a couple days, and a tropical depression could form early next week while the system moves westward across the tropical Atlantic. Formation chance through 5 days…medium…40 percent.

Another tropical wave is located a few hundred miles south-southeast of the Cabo Verde Islands. Slow development of this system is possible during the next several days while the it moves westward across the tropical Atlantic. Formation chance through 5 days…low…20 percent.

Dry for a few days!