Opelika Schools Hold Moment of Silence Instead of Prayer After Complaint

Opelika City School leaders are reviewing prayer over a loudspeaker prior to high school football games after receiving a letter from the Freedom From Religion Foundation.

The Opelika City Schools Board of Education received a letter from the Freedom from Religion Foundation based in Madison, Wisconsin.  The letter cited current Supreme Court of the United States ruling that school sponsored prayer is prohibited.

Opelika City Schools Board of Education received the letter on Sept. 3.  As stated, “The Supreme Court has specifically struck down invocations given over the loudspeaker at public school athletic events, even when student led.” In addition, the courts prohibit coaches to lead or participate in prayer with students. 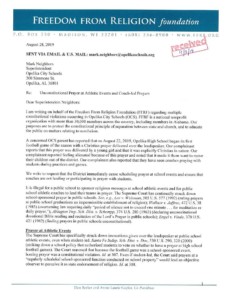 “We recognize that the United States of America is a nation of laws and we will abide by the current law,” stated OCS Superintendent Mark Neighbors. “Our students are allowed to pray, but our coaches are not allowed to participate.”

The letter received and current laws regarding school prayer are being reviewed by the Opelika City Schools Board attorney to confirm what is allowable for students.