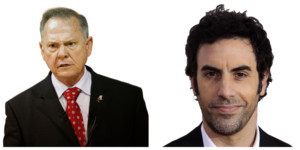 Comedian Sacha Baron Cohen is asking a federal judge to dismiss Roy Moore’s defamation lawsuit over a 2018 television segment of “Who is America?”

Lawyers for Baron Cohen, Showtime Networks and CBS wrote last week in a court filing that Moore signed an agreement waiving all legal claims before appearing on the segment. They also said the segment was satire and is protected under the First Amendment.

Moore thought he was receiving an award for supporting Israel. Instead, Baron Cohen lampooned him as a possible pedophile after sexual misconduct allegations arose during the 2017 U.S. Senate race. Moore denied the allegations.

Moore argued the waiver was fraudulently obtained because it did not disclose he was dealing with the comic.

Moore is running for Senate again in 2020.