VERY HOT AND DRY THROUGH MIDWEEK: The strong upper ridge over the state continues to flex its muscle, meaning very hot and dry weather continues and any prospects for rain are somewhere between slim and none. What we can promise is the blistering late summer heat will persist as highs through tomorrow will be in the around 100 degrees across South/Central Alabama, which are in the record range. Today’s record high is 102° set in 1927, while Wednesday’s record high is 100° in 2010.

FIRE DANGER ADVISORY ISSUED: The Alabama Forestry Commission (AFC) has issued a Fire Danger Advisory for all 67 Alabama counties effective immediately until rainfall is received. Current drought conditions and persistent high temperatures have combined to create a high probability of fuel ignition and an atmosphere favorable for wildfires. In the last 30 days, AFC wildland firefighters have battled 192 wildfires burning approximately 2,221 acres of land across the state. This number includes three fires that were over 100 acres in Bullock, Choctaw, and Wilcox counties, as well as one that was approximately 500 acres in Mobile County. Although the state is not under any type of burn restriction, the Commission urges everyone to delay outdoor burning until conditions improve if possible. While under the fire danger advisory, all necessary safety precautions should be exercised when doing any type burning. As always, call the Alabama Forestry Commission for a burn permit.

NOT AS HOT, BUT STILL DRY: Late Wednesday a “backdoor” cold front will work into Alabama from the east, and this will at least bring noticeably cooler temps by Thursday and Friday as highs fall back into the lower 90s. Still above average for this time of year, but much better than near 100 degree temps we got now. The easterly flow could squeeze out a few showers, but for the most part, it will be staying dry.

THE ALABAMA WEEKEND: No real change as the very dry airmass remains in place, so we expect sunny days and fair nights over the weekend with highs generally in the lower 90s, while nights will at least be comfortable with lows well down into the 60s.

NEXT WEEK: Still no signs of rain at for much of next week, which isn’t too unusual this time of year as climatology shows September and October are the two driest months of the year in Alabama, and having long dry spells this time of the year is not completely unusual. We will maintain above average temps with those continued lower to perhaps mid 90s each day. 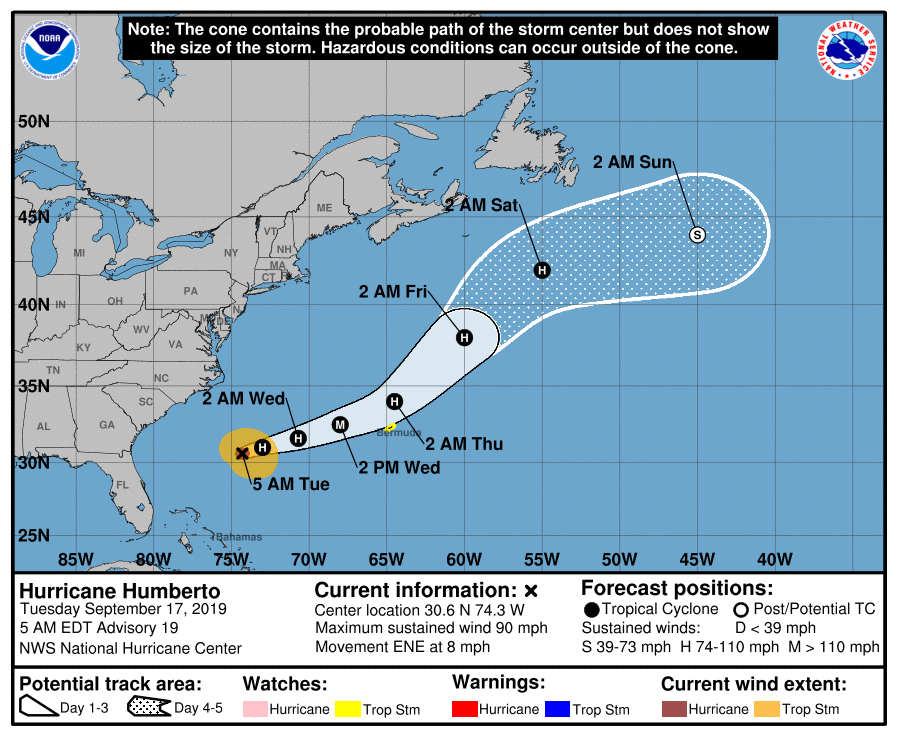 HURRICANE HUMBERTO: At 500 AM EDT, the large and ragged eye of Hurricane Humberto was located near latitude 30.6 North, longitude 74.3 West. Humberto is moving toward the east-northeast near 8 mph. This general motion with a gradual increase in forward speed is expected through early Thursday. On the forecast track, the center of Humberto is expected to approach Bermuda Wednesday night. Maximum sustained winds remain near 90 mph with higher gusts. Some strengthening is forecast during the next 36 hours and Humberto is expected to become a major hurricane by Tuesday night or Wednesday morning. Hurricane-force winds extend outward up to 30 miles from the center and tropical-storm-force winds extend outward up to 150 miles. The estimated minimum central pressure is 966 mb (28.53 inches). 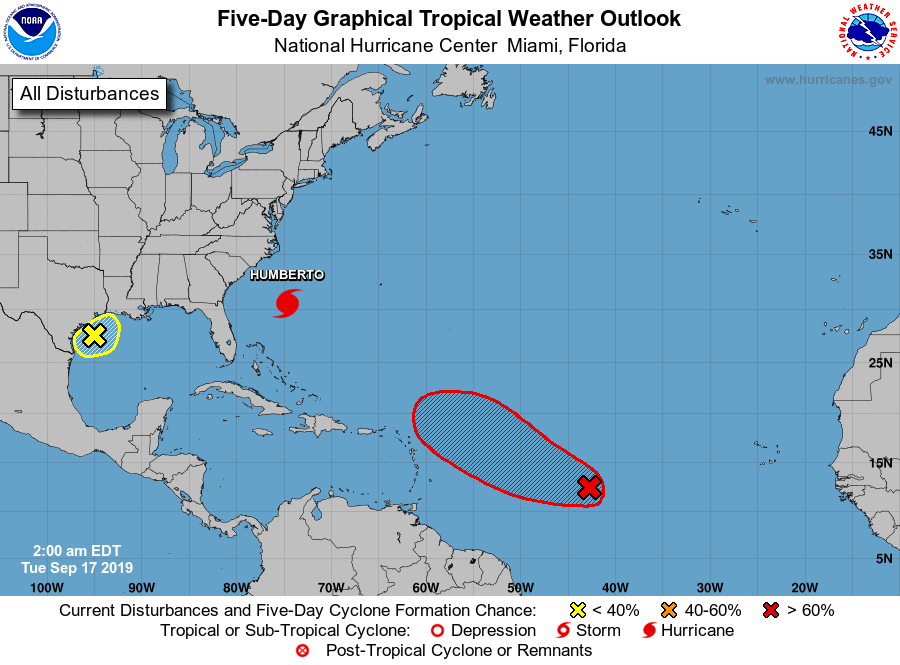 ELSEWHERE IN THE TROPICS: A small low pressure system located a little more than 1000 miles east of the Lesser Antilles continues to produce disorganized showers and thunderstorms. This system has changed little in organization since yesterday, but conditions are still expected to be conducive for the formation of a tropical depression during the next day or so while the system moves slowly northwestward to west-northwestward. Formation chance through 48 hours…high…70 percent. Formation chance through 5 days…high…90 percent.

Shower activity associated with a broad area of low pressure over the northwestern Gulf of Mexico has become a little more concentrated during the past several hours. Nearby observations indicate that although pressures are falling in the area, there are no signs of a surface circulation at this time. Some slight development is possible before the system moves inland along the northwestern Gulf coast Tuesday night. Regardless of development, this system is expected to produce locally heavy rainfall and possible flash flooding along portions of the central and upper Texas coastal areas later this week. Formation chance through 5 days…low…30 percent.

The Latest: FA Cup final in England set for Aug. 1

The Latest: Spanish soccer league could use virtual crowds

The Latest: Pan Pacific swimming won't be held until 2026