Assisted Living Facility Where Elderly Woman Died, to be Closed Or Sold 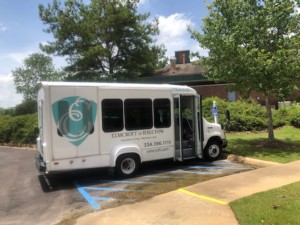 A Montgomery assisted living facility, where a resident died earlier this year after being left in a hot van, may be closing down for good.

A 35-page report from an investigation by the state reveals some unsettling details about the incident that eventually led to the death of an 83-year-old Doris Mitchell.

Documents say three employees at Elmcroft of Halcyon assisted living facility falsified documents claiming that Mitchell was accounted for 3 separate times in the facility on June 19th; the day she was actually left inside of a hot van for more than 5 hours after a field trip.

One employee documented that Mitchell had exited the van,  another logged that she had eaten lunch. Later that day another employee indicated  that she was given her medicine  all while Mitchell, who according to her family was unable to walk, was missing.

When employees eventually realized she was missing, documents say the elderly woman was found on the floor of the van, and foaming at the mouth.  She was rushed to the hospital and treated for heatstroke and other complications. She died less than a month later.

There was a hearing last week to decide whether revoke the living facility’s licence, or not.  The Alabama Department of Public Health confirmed that they are now in negotiations with Elmcroft, and they must either sell or close the facility

A spokesperson for Elmcroft sent Alabama News Network this statement:

In a previous statement Elmcroft of Halcyon said it has held mandatory retraining of its employees and is prepared to take any additional steps to promote resident safety.  Alabama News Network has asked if the employees that were fired for falsifying documents have been charged in connection to Mitchell’s death, but did not receive a response before the publication of this article.

Mitchell’s family has filed a lawsuit against Elmcroft. The family’s attorney J.P. Sawyer, did not return Alabama News Network’s calls to provide a comment.