BREAK OUT THE JACKETS: Okay not really, but noticeably cooler air has arrived behind the backdoor cold front that moved through the state late yesterday, that was even able to squeeze out a few showers. Today and tomorrow highs fall back into the upper 80s in East Alabama, while lower 90s are still expected in West Alabama. Expect breezy easterly winds these two days, but unfortunately it will be a dry wind, and rain chances will continue to be near zero. Nights will be very comfortable as lows settle well down in the 60s with even some 50s could make an appearance on the maps during the early morning hours.

THE ALABAMA WEEKEND: The very dry airmass remains in place, so we expect sunny days and fair nights over the weekend with highs generally in the lower 90s across South/Central Alabama, while nights will at least be comfortable with lows well down into the 60s.

FOOTBALL WEATHER: Clear for the high school games tomorrow night with temperatures falling from the low 80s at kickoff, into the 70s by the second half.

Saturday, Alabama will host Southern Mississippi at Bryant-Denny Stadium (11a CT kickoff)… the sky will be sunny with temperatures rising from near 85 at kickoff, to 90 by the final whistle.

Auburn is on the road; they travel to College Station to take on Texas A&M (2:30p CT kickoff)… scattered showers and storms are possible during the game with temperatures generally in the low 90s.

NEXT WEEK: A few isolated showers are possible early in the week, but it looks like the ridge will try and build back in over the region next week so the forecast will be mainly dry. Also, highs will begin to creep back up into the mid 90s by midweek.

It’s late September and the tropics are very active, as they should be since this is the peak of the season. 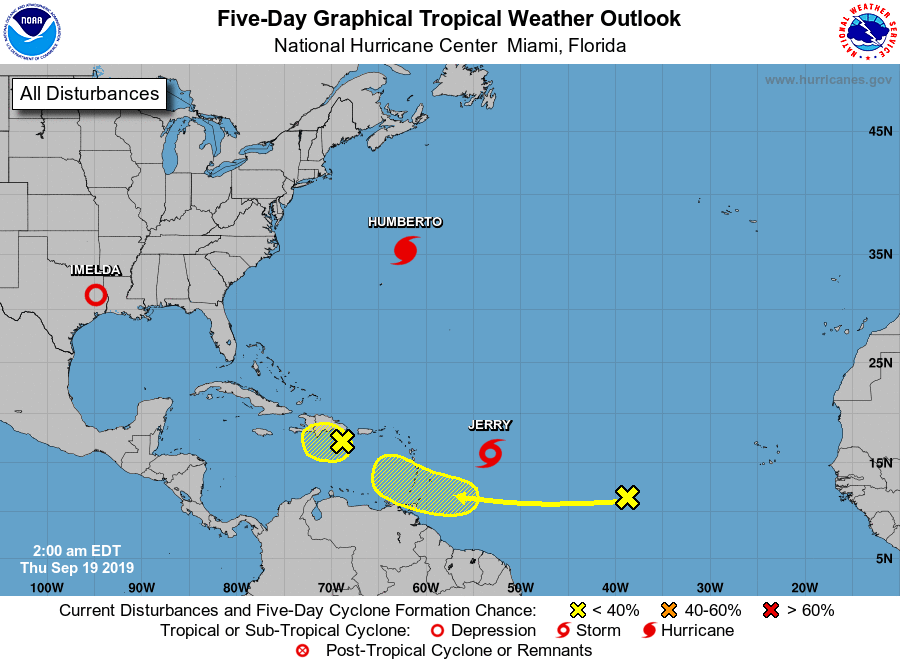 HURRICANE HUMBERTO: At 500 AM AST, the center of Hurricane Humberto was located near latitude 35.2 North, longitude 62.2 West. Humberto is moving toward the northeast near 22 mph. This general motion is expected to continue today, followed by a north-northeastward motion at a slower forward speed Thursday night and Friday. A turn toward the east-northeast is expected Friday night and Saturday. On the forecast track, the center of Humberto will continue to move away from Bermuda. Maximum sustained winds are near 125 mph with higher gusts. Humberto is a category 3 hurricane on the Saffir-Simpson Hurricane Wind Scale. The hurricane should start to weaken today, and it is expected to become a post-tropical cyclone by Friday. Hurricane-force winds extend outward up to 90 miles from the center and tropical-storm-force winds extend outward up to 405 miles. The estimated minimum central pressure is 952 mb (28.12 inches).

TROPICAL STORM JERRY: At 500 AM AST, the center of Tropical Storm Jerry was located near latitude 16.0 North, longitude 53.2 West. Jerry is moving toward the west-northwest near 16 mph. A west-northwest motion at a slightly faster forward speed is expected over the next few days. On the forecast track, the center of Jerry will be near or north of the northern Leeward Islands Friday and pass north of Puerto Rico on Saturday. Maximum sustained winds have increased to near 70 mph with higher gusts. Jerry is forecast to become a hurricane later today, with little change in strength anticipated on Friday or Saturday. Tropical-storm-force winds extend outward up to 45 miles from the center. The estimated minimum central pressure is 995 mb (29.39 inches). 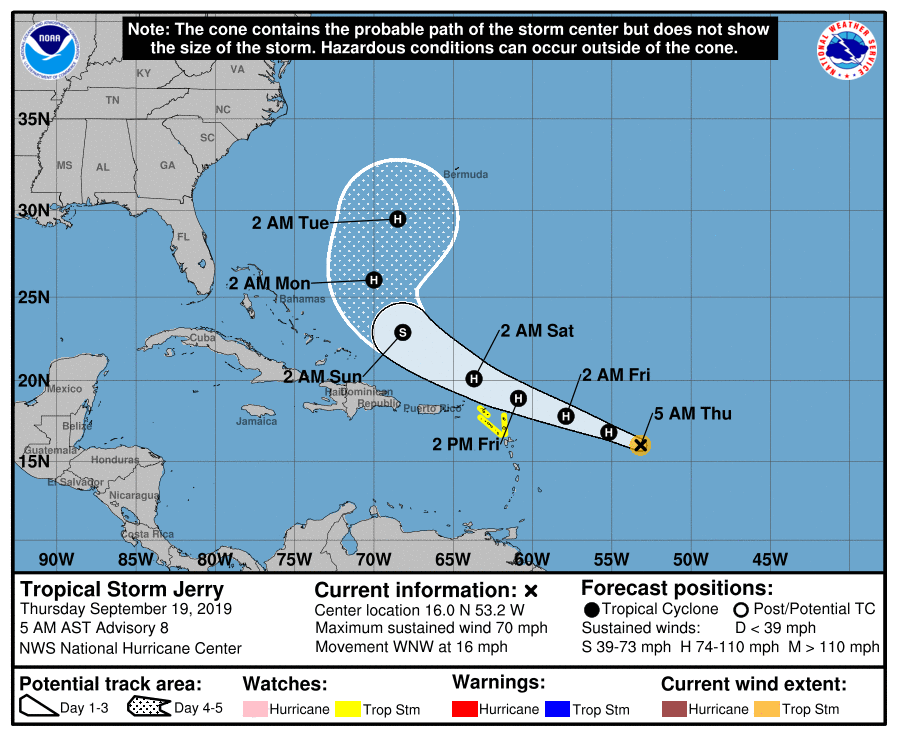 ALSO IN THE TROPICS: A tropical wave located almost 1000 miles west of the Cabo Verde Islands is producing disorganized cloudiness and showers. Some development of this system is possible while the system approaches the Windward Islands this weekend or when it moves across the eastern Caribbean Sea early next week. Formation chance through 5 days…low…30 percent.

A large area of disorganized showers and thunderstorms near and to the southeast of the Dominican Republic is associated with a tropical wave. While upper-level winds are not forecast to be conducive for significant development, locally heavy rainfall is possible over portions of the Dominican Republic and Haiti during the next couple of days. The disturbance is forecast to move slowly northwestward through the weekend. Formation chance through 5 days…low…10 percent.

Next names up on the list are Karen and Lorenzo.

Enjoy this cool down!
Ryan