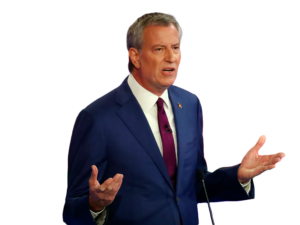 De Blasio struggled to gain traction in a sprawling field of Democrats seeking the presidency. He announced his decision in an MSNBC interview on Friday.

De Blasio launched his bid in May, but his campaign largely failed to take off.

De Blasio says he feels he’s contributed all he can “to this primary election.” He tells MSNBC’s “Morning Joe” show “it’s clearly not my time.”