The University of Alabama Million Dollar Band has been selected to perform in the 2020 Macy’s Thanksgiving Day Parade.

According to a press release posted by the university, The Million Dollar Band will join the Parade to the call of “Let’s Have a Parade,” the iconic phrase that has signaled the start of every Macy’s Thanksgiving Day Parade since 1924.

This will be the band’s first appearance in the parade. 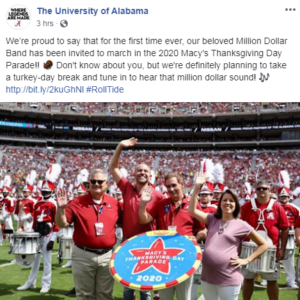 “It’s fitting that the UA Million Dollar Band, one of the most respected university marching bands in the country, will be performing in one of the largest parades in the world,” said UA President Stuart R. Bell. “What Alabama fans have been able to enjoy on Saturdays will now be shared with more than 50 million people live on the streets of New York and watching on television. We’re honored by the invitation, and I couldn’t be more pleased by the work of these talented student musicians.”

“The Macy’s Thanksgiving Day Parade is one of America’s iconic holiday traditions,” said Dr. Ken Ozzello, UA professor of music and director of bands. “Having the opportunity to participate will be thrilling for the members of the Million Dollar Band and provide them with life-long memories.”