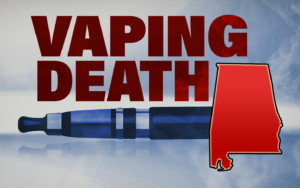 The Alabama Department of Public Health has confirmed the state’s first death from a vaping-associated injury. The death involved a man from East Alabama whose identity hasn’t been released.

The death comes as the Centers for Disease Control and Prevention (CDC) continues its investigation of an outbreak of lung injury associated with vaping that involves several states. The CDC is investigating more than 805 lung injury cases in 46 states and one U.S. territory. Twelve deaths have now been confirmed in a total of 10 states, not including Alabama.

Patients have experienced symptoms that include cough, shortness of breath and fatigue, with symptoms growing worse over a period of days or weeks before admission to the hospital, health officials say. Other symptoms may include fever, chest pain, nausea, abdominal pain and diarrhea. Most of the cases are among adolescents and young adults.

The state health department recommends that all consumers consider refraining from the use of e-cigarettes and vape products until national and state investigations into vaping-related deaths and illnesses are complete. Two-thirds of the cases being investigated by the CDC involve patients who are 18 – 34 years old.

Those who choose to continue the use of e-cigarettes and vape products should not buy these products off the street or from unregulated sources, state health officials say. Consumers should avoid modifying or adding any substances that are not intended by the manufacturer. Consumers with nicotine addiction who have used e-cigarettes as a method to quit smoking should not return to the use of conventional cigarettes.

Alabama law now prohibits the sale or transfer of vaping products or electronic nicotine delivery devices to minors. Free help is available for individuals who are ready to kick the tobacco habit at 1-800-QUIT-NOW (1-800-784-8669) or quitnowalabama.com.

— Information from the Alabama Dept. of Public Health (ADPH)