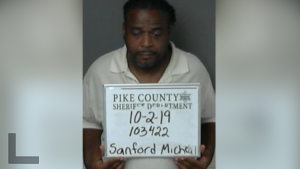 48-year-old Michael Sanford of Brundidge was taken into custody after a search warrant was executed. During the search, law enforcement say they found drugs inside Sanford’s home.
Sanford has been charged with unlawful possession with intent to distribute and possession of drug paraphernalia.
Officers say they found bags of cocaine and over $20,000 in cash.

“There was also Pyrex glass containers with residue, along with baking powder, showing the evidence of what was being made there. The streets of Brundidge and Pike County are a lot safer because this individual was taken off the streets,” Chief Deputy Buck Williams said.

Sanford is currently being held in the Pike County jail on a $31,000 bond. The Troy and Brundidge Police Departments helped aid in the search.

Cranking Up the Heat