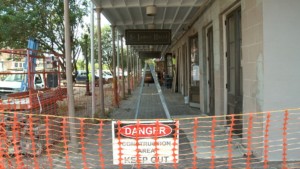 After sitting vacant and boarded up for the first part of the year — the historic St. James Hotel in downtown Selma — is now bustling with activity.

Rhaglan Hospitality — the property’s new owner — is working to upgrade and remodel the historic hotel.

Workers are on site painting — priming — and doing woodwork.

And they’ve also added more than a dozen new guests rooms to the hotel by eliminating the property’s ballroom space.

“They had the big ballroom, they could section it off into different areas back there but the whole thing is gone now. It’s just going to be guest rooms back there, putting nine guest rooms on the first floor,” said Project supervisor Earl Goodson.

And it’s believed to be the only surviving riverfront antebellum hotel in the Southeast.