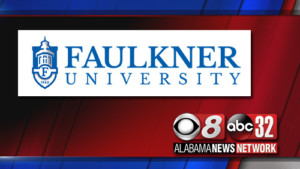 Faulkner University has unveiled a new logo that was years in the making.

The new logo was displayed for the first time at last night’s annual Benefit Dinner featuring Nikki Haley. Guests at the event at the Renaissance Hotel and Convention Center saw the new logo on the dinner program, entry signs and in all branding at the event.

The university says although the idea to create a new academic logo originated a few years ago, it was seriously considered earlier this year. The updated design was created to showcase Faulkner’s deep Christian faith, high academic standards and campus community.

“We were looking for the updated logo to be a crest, something that included the architectural features found around campus that everyone, both alumni and current students could recognize and take pride in,” said Patrick Gregory, Director of University Marketing in a statement.

“I think this new design provides Faulkner with a distinguished crest that visually aligns with the mission and vision of Faulkner and showcases a level of prestige and academic standing we have in the community,” Gregory said. “We have a campus full of talented and professional students and professors and we want Montgomery and the rest of the country to know that.”

Faulkner leadership contacted Greg Hahn, a graphic design artist and logo designer, who owns Designs by Hahn. He’s been helping businesses, athletic teams, universities and organizations for years create images that best portray their brand. Hahn recently resigned Faulkner’s athletic logo before he was contacted to design one for the academic side of the university.

“The work I do is bigger than the design itself. By that I mean that the logo represents a community and people identify with it,” Greg Hahn said. “They wear it on their clothes and some even use it as a bumper sticker on their cars. It’s more than just a pretty picture. It’s rewarding to know that an idea that began as a simple sketch can go on to be valuable to the organizations that will use the design for years, hopefully decades and decades, to come and I’m thankful to Faulkner for entrusting me to work on this.”

The new logo replaces Faulkner’s original logo created nearly 35 years ago, which consisted of the traditional curved Faulkner ‘F’ with the image of spire from atop the E.L. Collum Rotunda through the center. This image was adopted shortly after the university changed its name from Alabama Christian College to Faulkner University in 1985. At that time, the Rotunda was one of the first buildings constructed on the Atlanta Highway campus after the college moved from its original Ann Street location.

The final redesign of the logo not only maintains the heritage of the campus by incorporating the Rotunda’s spire, but it works in other architectural features from around campus in order to reflect the growth and expansion of the university including the most recent addition of the campus’ new front entrance. A cross located in the center of the design showcases the university’s Christian mission.