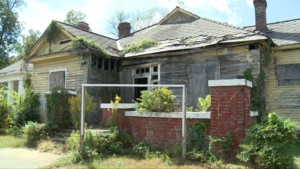 The dilapidated former home of a Selma voting rights legend will soon be getting a much-needed — and long overdue facelift.

“I just felt like this is something that we could not allow to go by the wayside.

The former home of Amelia Boynton Robinson — has deteriorated over the years — into a community eyesore.

But now a $500,000 grant has been awarded to the Gateway Educational Foundation and Brown Chapel AME Church — to restore the house.

“I just felt like this is something that we could not allow to go by the wayside,” said Strong. “It will be done as speedily as possible but yet its got to be done in a way that ensures the proper use of the tax dollars that are going into this rehabilitation.”

Boynton and her husband Samuel were voting rights activists in Selma for about thirty years. She was one of the Courageous Eight — the leaders of the organization that invited Dr. King to Selma. And she was also one of the marchers — beaten on Bloody Sunday.

Strong says the restoration project will take about a year to complete — once it gets underway.

“It has to follow specifically, regulatory guidelines and stipulations,” he said.

“It will look as closely as possible, like the house, the original house, that she lived in, and lived her life in. And did the kind of things that she did.”

Strong also says the house will be opened to the public — once the project is completed. He says the home may become an interpretive site in the future.

The grant was awarded by the National Park Service.