Montgomery Voters Going to the Polls to Choose New Mayor 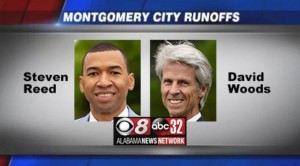 Today is runoff day in the city of Montgomery. Voters have until 7 p.m. to head to the polls to choose the city’s next mayor. In addition, three council races will be decided.

In the mayor’s race, Montgomery County Probate Judge Steven Reed is facing off against businessman David Woods, who owns WCOV Fox 20, a local TV station.  If Reed wins, he would become the first black mayor in city history.

Incumbent Mayor Todd Strange chose not to seek re-election after holding the office for 10 years.

In the initial election on August 27, Reed finished in first place with about 43% of the vote to Woods 23%. The race is in a runoff because no one finished with a majority of the votes in the 12-person initial race.

As for the council races, in District 3, incumbent Tracy Larkin faces a challenge from Marche Johnson.

In District 5, C.C. Calhoun and Phyllis Harvey-Hall are battling for the open seat.

In District 6, Jon Dow and Oronde Mitchell are competing for the open seat.

Both Calhoun and Dow have previously served on city council and are trying to mount a comeback.

Alabama News Network will have Live reports in our newscasts, as well as Live updates throughout the evening once the polls close.

We will also have the latest results at the bottom of your TV screen.

Political Analyst Steve Flowers will be Live in our studio at 5, 5:30, 6 and 10 with his insight and reaction as the numbers come in.