For today and tomorrow, the weather should be fairly quiet with dry conditions. The sky will be partly to mostly sunny with highs generally in the upper 80s to lower 90s. Morning lows will be nice and in the lower to mid 60s.

FRIDAY NIGHT FRONT: Clouds will increase late Friday ahead of the next cold front, which could bring some rain to the state Friday night. For now it looks like rain will be fairly light, less than half an inch. The day itself should be mainly sunny and very warm with highs likely in the lower 90s.

WONDERFUL WEEKEND WEATHER: Some showers could linger into the morning hours Saturday, but we should see a clearing sky as a surge of cool, continental air drops into Alabama. Look for sunny pleasant days and clear cool nights Saturday and Sunday…highs will be in the lower 80s and lows in the low 50s. Colder spots across the state will drop down into the 40s Sunday morning.

RACE WEEKEND AT TALLADEGA: A few showers are possible around the Superspeedway late Friday night or Saturday morning; Sunday looks picture perfect
for the 1000bulbs.com 500 with sunshine in full supply. The high Saturday will be in the upper 60s, followed by low 70s Sunday.

FOOTBALL WEATHER: For the high school games Friday night, the sky will be mostly cloudy, and scattered showers are possible. Temperatures will be in the 70s at kickoff, falling into the 60s by the fourth quarter.

Alabama travels to College Station to take on the Texas A&M Aggies (2:30p CT kickoff)… the sky will be sunny with a kickoff temperature near 71 degrees.

NEXT WEEK: The dry and pleasant weather should continue for Monday and into Tuesday, but it looks like a we will begin to see an increase in moisture on Tuesday which should bring a chance of showers late in the day, overnight, and into Wednesday. The rest of the week looks dry with fairly seasonal temperatures

IN THE TROPICS: The Atlantic continues to be quiet for the most part, but the season continues until November 30th. A few of areas of interest: 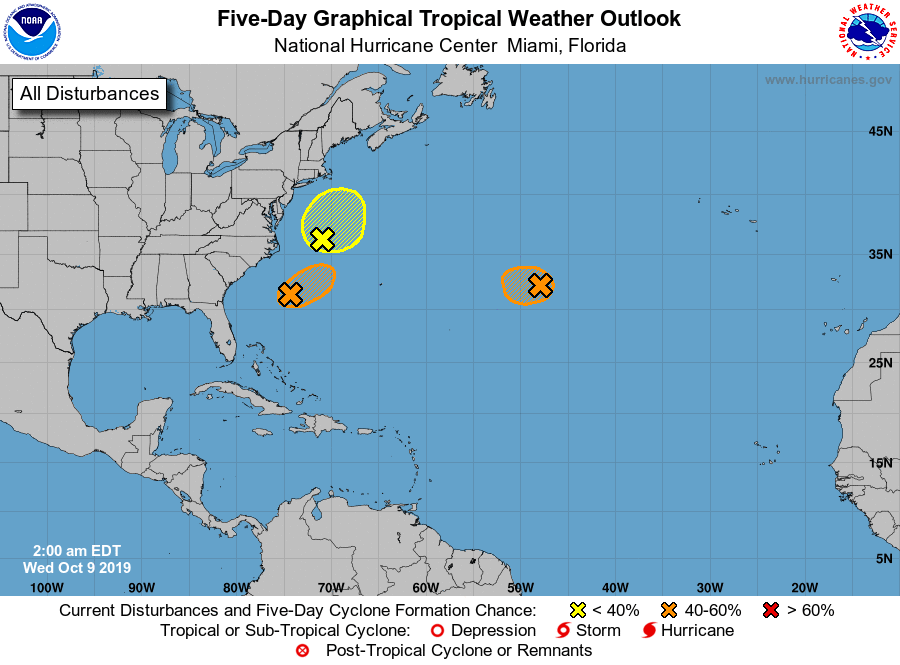 1. A non-tropical low pressure system located about 1000 miles east of Bermuda continues to produce winds to near gale force. This system could still become a tropical or subtropical storm while it moves slowly westward through today. However, upper-level winds are expected to become unfavorable for further development by tonight. Formation chance through 5 days…medium…40 percent.

2. Cloudiness and showers located off the mid-Atlantic coast of the United States are associated with a non-tropical area of low pressure that is beginning to produce gale-force winds. This system is forecast to move northward or northeastward and strengthen as a non-tropical low off the east coast of the United States during the next day or so. This system could acquire some subtropical characteristics by the end of the week when it drifts southward offshore of the United States. Regardless of development, this system is expected to bring strong winds, coastal flooding, and rough surf to portions of the mid- Atlantic and northeastern United States coasts through late week. Formation chance through 48 hours…low…10 percent. Formation chance through 5 days…low…30 percent.

3. A small area of low pressure is located about 270 miles south-southeast of Cape Hatteras, North Carolina. While the low is likely producing winds to near gale force, the associated thunderstorm activity is limited. Although upper-level winds are not particularly favorable for additional development, this system still has the potential to become a tropical depression or storm today. By tonight, the system is forecast to merge with the low off the east coast of the United States. Formation chance through 5 days…medium…40 percent.

Next names on the list are Melissa, Nestor, and Olga.

Periods of rain through Thursday

Rain and Storms at Times; Flash Flood Watch in Effect

More Rain Ahead This Week