For our Thursday, the weather will remain fairly quiet with mainly dry; the sky will be mostly sunny with highs generally in the upper 80s to lower 90s. Tonight will be another very nice one, with mainly clear conditions and lows in the lower to mid 60s.

WAITING ON FRONT: Clouds will increase late tomorrow ahead of the next cold front, which should bring some rain to the state late Friday night. For now it looks like the rain will most likely arrive after midnight. The day itself Friday should be mainly sunny and very warm with highs around 90°. For the high school games Friday night, the sky will be mostly cloudy, and scattered showers are possible, especially for stadiums on the western side of the state. Temperatures will be in the 70s at kickoff, falling into the 60s by the fourth quarter.

THE ALABAMA WEEKEND: Showers should linger into Saturday, nothing especially heavy, and the clouds will likely stick around much of the day as well. The surge of cooler, continental air and lack of sun Saturday will make it hard for a lot of locations in South/Central Alabama to climb out of the 70s. Saturday night should certainly be a cool one for many locations with lows in the For now, Sunday we will forecast a partly sunny day, and mention just an outside risk of a shower Sunday afternoon. The high Sunday should be in the low 80s.

FOOTBALL WEATHER: Alabama travels to College Station to take on the Texas A&M Aggies (2:30p CT kickoff)… the sky will be sunny with a kickoff temperature near 71 degrees.

RACE WEEKEND AT TALLADEGA: A few showers are possible around the Superspeedway late Friday night or Saturday… rain amounts should be light and spotty. The forecast for Sunday is now a bit uncertain; for now we will forecast a mix of sun and clouds with only an outside risk of some light rain during the big race. The high Saturday will be in the mid to upper 60s, followed by 70s Sunday. Sunday morning will be chilly with lows in the upper 40s.

NEXT WEEK: We will continue to mention more clouds than sun with some scattered showers Monday, Tuesday, and Wednesday as another front pushes into the state. Behind that front, drier and much cooler air should arrive late next week with mainly sunny days and seasonal temps.

IN THE TROPICS: The Atlantic continues to be quiet for the most part, but the season continues until November 30th. A few areas of interest: 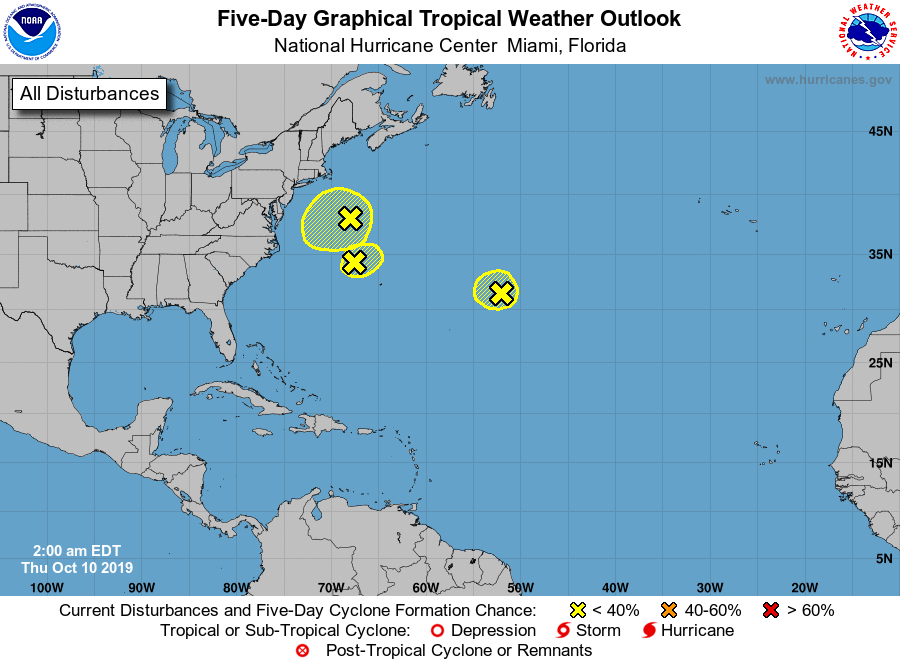 1. A non-tropical low pressure system located about 750 miles east of Bermuda is producing limited shower and thunderstorm activity. Upper-level winds are becoming unfavorable, and development of this system is not likely. Formation chance through 5 days…low…10 percent.

2. Cloudiness and showers located off the northeast coast of the United States are associated with a non-tropical area of low pressure that is producing gale-force winds. This system is forecast to strengthen as a non-tropical low off the east coast of the United States during the next day or so. Environmental conditions are expected to be unfavorable for significant subtropical or tropical cyclone development through the end of the week while it meanders offshore of the United States. Regardless of development, this system is expected to bring strong winds, coastal flooding, and rough surf to portions of the mid-Atlantic and northeastern United States coasts through late week. Formation chance through 5 days…low…20 percent.

3. An area of low pressure located several hundred miles east-southeast of Cape Hatteras, North Carolina is producing a few thunderstorms. Upper-level winds are not conducive for development, and this system is forecast to merge with the low off the east coast of the United States by Thursday morning. Formation chance through 5 days…low…10 percent.

Next names on the list are Melissa, Nestor, and Olga.

Have a exciting Thursday!
Ryan

Temperatures Will Trend Colder this Week