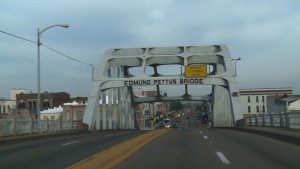 From the West Alabama Newsroom:

Black Belt counties in west Alabama consistently have the highest unemployment numbers in the state.  There’s a need for jobs to bring those numbers in line with the state average.

“It’s not much work here. I haven’t seen many jobs in this area. They need jobs here,” said Tragus Palmer.

Jobs — jobs — jobs. Some people in Selma say there are none. While others say there just aren’t enough of them, especially for young people.

“I have three grandchildren, and they’re looking for jobs all the time,” said Marilyn Kaldor. “I think it stinks. They need more jobs for younger people, and some of the older jobs need to be upgraded.”

Especially the pay. Many residents said a lack of job opportunities is the reason why the population in the area has been steadily declining over the years. They said many people have had to leave town to find a job that pays a livable wage.

“We started having to go to other areas looking for jobs like Montgomery, Prattville, Birmingham and stuff like that to look for jobs,” said Charles Blount.

But just like the population, the unemployment rate has steadily declined in the region over the last decade as well, but it continues to lag behind the rest of the state.