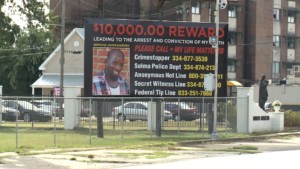 For nearly a year, the mother of a Selma murder victim has been on a mission to try and help police find her son’s killer.

Jermaine Sanders used to put up billboards for a living. Now his face is on one. Two actually.

They’re located on the city’s two busiest streets. One is on Highland Avenue near Papa Johns. The other is on Broad Street near Church’s.

Sanders was killed last year on Thanksgiving Day — just around the corner from his mother’s house.

“Everybody diving to the floor, grabbing cell phones, calling 911.”

Shuford said she would find out later — that it was her son — who was the victim.

Police say Sanders had left a nearby store and was driving down the 1800 block of Church Street when he was ambushed.

“The victim was shot multiple times inside his vehicle. We don’t know what lead up to the shooting. Right now the motive is unknown,” said Sgt. Ray Blanks.

She said she hopes the money will motivate someone to step forward with information — that could help authorities bring her son’s killer to justice.

“No one has come forward yet. So, I’m hoping someone will come forward and give some information regarding his death.”