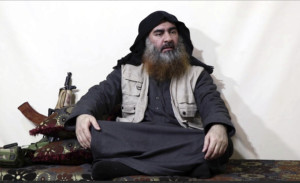 FILE – This file image made from video posted on a militant website April 29, 2019, purports to show the leader of the Islamic State group, Abu Bakr al-Baghdadi, being interviewed by his group’s Al-Furqan media outlet.  (Al-Furqan media via AP, File)

The leader of the Islamic State who presided over its global jihad and became arguably the world’s most wanted man, is dead after being targeted by a U.S. military raid in Syria, President Trump said in an address to the nation this morning.

“Abu Bakr al-Baghdadi is dead,” Trump announced at the White House, saying the U.S. had “brought the world’s number one terrorist leader to justice.”

Speaking from the White House, Trump described an airborne raid by American special operations forces and said they flew over heavily militarized territory controlled by multiple nations and forces.

No U.S. troops were killed or injured in the raid, Trump said.

As U.S. forces bore down on al-Baghdadi, he fled into a “dead-end” tunnel with three of his children, Trump said, and detonated a suicide vest. “He was a sick and depraved man, and now he’s gone,” Trump said. “He died like a dog, he died like a coward.”

Trump thanked Russia, Turkey, Syria and Iraq, as well as Kurdish fighters in Syria for their support.

The recent pullback of U.S. troops he ordered from northeastern Syria raised a storm of bipartisan criticism in Washington that the militant group could regain strength after it had lost vast stretches of territory it had once controlled. Trump said the troop pullout “had nothing to do with this.”

Planning for the operation began two weeks ago, Trump said, after the U.S. gained unspecified intelligence on al-Baghdadi’s whereabouts.

Eight military helicopters flew for more than an hour over territory controlled by Russian and Syrian forces, Trump said, before landing under gunfire at the compound.