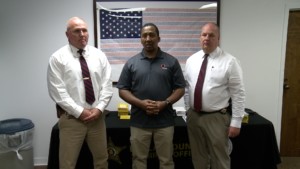 There’s a new phone number to call for people in the Selma-Dallas County area — who want to help take a bite out of crime.

Central Alabama Crimestoppers has expanded its coverage area to include Dallas County.

“We’re branching out where we noticed that we had to invite in a lot of agencies because criminals, they don’t have borders but sometimes police departments, jurisdictions, they do,” said Executive Director Tony Garrett.

Now Selma and Dallas County residents can call (334) 2-1-5 STOP — if they have information about a crime.

Sheriff Mike Granthum says the move will improve the response time — during some investigations.

“Their line is monitored 24-7. When I say monitored. I mean a human voice will actually answer the phone. It’s not a recording like we have,” said Granthum.

He says people can call in a tip about any crime — no matter how long ago it happened.

Proposed Bill Would Speed up the Death Penalty Process