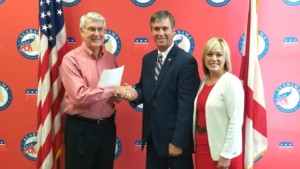 There’s a new person in the ring to try to replace outgoing U.S. Congresswoman Martha Roby.

According to his campaign, Barry Moore officially qualified as a candidate in the AL-2 Congressional race at the Alabama GOP Headquarters in Hoover.

Former State Representative Moore served in the legislature representing District 91 from 2010 until 2018. In 2018, Moore was a candidate for the AL-2 seat, but ultimately lost in the primary.

Moore joins Jeff Coleman, Troy King, Bob Rogers, and Jessica Taylor as Republicans vying for the seat. So far, no Democrats have expressed interest in running.