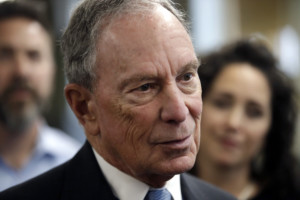 CBS News is reporting that former New York City Mayor Michael Bloomberg is planning to file paperwork today to place his name on the ballot for the Alabama Democratic presidential primary next year.

This is the first concrete signal that he is on the verge of launching a presidential campaign, according to a person familiar with his plans.

Bloomberg is set to make a final decision “in the near future,” as soon as Monday, said a Democrat who recently spoke with the former mayor about his plans.

But the person familiar with Bloomberg’s planning disputed the timeline, saying, “It’s not weeks and weeks away. It’s soon.”

“He is actively taking steps to pursue a run,” the person added.

The media mogul is in New York today and is not planning any public events or to conduct any interviews in the coming days as he makes a final decision about a presidential run.

Bloomberg, 77, is the proverbial political boy who cried wolf and has stoked speculation about a potential presidential campaign ever since 2008, when he first toyed with running as an independent.

But after years of talk, this week he took action by dispatching aides to Alabama to collect the signatures required to appear on the ballot. Alabama has the earliest filing deadline for its presidential primary on Super Tuesday, March 3, and only requires collecting 500 signatures – an easy task for a well-financed candidate.

In addition to filing paperwork in Alabama, Bloomberg’s team is “actively working” to meet Monday’s filing deadline in Arkansas and next Friday’s deadline in New Hampshire, the first state to hold a primary. Both states only require mailing in an application with a four-figure check.

On Friday, the leaders of the New Hampshire and Iowa Democratic parties issued a rare joint statement acknowledging Bloomberg’s interest in the race – and encouraging him to show up to campaign.

“We are excited that this Democratic presidential nomination contest has so many qualified candidates,” the party chairmen said, adding later that “we are certain that Granite Staters, Iowans, and other early state voters are eager to ask Michael Bloomberg about his plans to move our states and our country forward. We hope that they will have that opportunity.”

The party leaders spoke out as Bloomberg aides have signaled that he might forego Iowa and New Hampshire and focus instead on a more robust 50-state strategy.

“Don’t expect him to run a traditional campaign,” said the person familiar, who was granted anonymity to speak frankly about the potential campaign’s strategy. “Our playbook would be that on day one, we could be in Colorado or Alabama or California. We could be there with significant resources, with talent that we could build up in a more substantial way than others could in those states.”

Aides are not concerned about raising money for the bid, because Bloomberg is worth at least $52 billion and plans to self-fund, at least at the start. He never took campaign donations during his three mayoral runs.

Aides conceded, however, that Bloomberg would need to accept donations in order to meet the donor and polling thresholds required to appear on a debate stage alongside other contenders.

Bloomberg has already banked away the goodwill of Democrats nationwide. He rejoined the party last year and has spent millions of dollars to help elect Democratic congressional and state-level candidates. He did so again in recent weeks to help Virginia Democrats retake control of the state legislature in part by campaigning on a vow to stiffen the state’s gun laws.

Already, Bloomberg is taking steps to reach out to members of the Democratic Party leadership.

In South Carolina, Bloomberg has reached out to Stephen K. Benjamin, the mayor of Columbia, S.C., who said he thinks the New Yorker would be a welcomed addition to the field.

Benjamin noted that there are already candidates who have business experience – Andrew Yang – who serve as mayors – Pete Buttigieg – and former candidates like Washington Gov. Jay Inslee and former Texas Rep. Beto O’Rourke, who made climate change and gun control part of their platforms.

Benjamin called Bloomberg “an early leader” in the national fight for stricter gun control and “a constant and passionate leader with mayors against illegal guns in every town and for some voters in our primary — I can’t say the majority — but a significant cut out, you know, that’s their number one issue.”

Reached briefly by phone Thursday, Reid told CBS News, “I always had great admiration for the mayor. He’s been on guns, there’s been no one in the country better on doing something about gun violence, on firearms, than Michael Bloomberg.”

“I think Bloomberg getting involved is not going to hurt anything,” Reid added.