Ceremony in Selma Honors Military Veterans and their Service 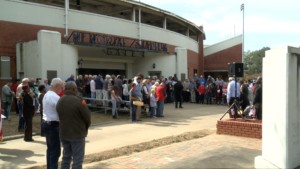 People in Dallas County gathered at Memorial Stadium in Selma to honor veterans and their service to the country.

More than a hundred people were on-hand at the annual Veteran’s Day ceremony at Memorial Stadium in Selma — Monday.

The crowd came to honor the service and sacrifice of the nation’s servicemen and women.

“It makes me feel very proud to be in America — and been a soldier,” said veteran Mark Boswell.

Wreaths were laid at the foot of the eternal flame during the ceremony. And Retired Air Force Colonel — Jim Corrigan was the keynote speaker.

Less than 1-percent of America have served in the military. Ninety-nine percent get to enjoy the benefits of the sacrifices of these veterans.

The ceremony was sponsored by the American Legion — Thomas R. Macking Post 20.

Organizers say today also marks the 100th anniversary of both — the founding of the American Legion — and ending of World War I.