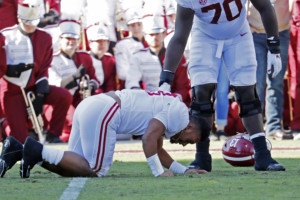 Tua Tagovailoa has been flown from Starkville, Mississippi, to Birmingham for treatment after he injured his hip while being dragged down late in the first half in Alabama’s game against Mississippi State. It was likely to have been his final series of the day.

Alabama went on to beat Mississippi State 38-7. But the victory was greatly overshadowed by the fact the Crimson Tide may have lost its star quarterback for the season.

Tagovailoa was injured after a scramble when he was tackled from behind by Bulldogs linebacker Leo Lewis. Tagovailoa needed help getting to his feet and was carted off the field.

The junior had been nursing an ankle injury that needed surgery four weeks ago and caused him to miss a game and a half. Alabama coach Nick Saban said Saturday’s injury was unrelated to the ankle.

Saban called it a “freak injury.”

Saban told ESPN at halftime the plan was to remove Tagovailoa from the game before the series when the quarterback was injured. Alabama was already up 35-7, but it was decided to let Tagovailoa play one possession to get some work in the two-minute drill.

Alabama officials confirmed Tagovailoa was flown by helicopter to St. Vincent’s Medical Center in Birmingham. He was 14 of 18 for 256 yards and two touchdown passes against Mississippi State, giving him 31 TD passes on the season. He was replaced in the second half by Mac Jones, who went 7 for 11 for 94 yards.

The Crimson Tide (9-1, 6-1 Southeastern Conference) were coming off a 46-41 loss to LSU that nudged it out of College Football Playoff position to fifth in the latest selection committee rankings.

Now the Crimson Tide is facing the possibility of trying to impress the committee without Tagovailoa, the Heisman Trophy runner-up from last season and a potential top-10 selection in the NFL draft.

Tagovailoa played well against LSU, passing for more than 400 yards, but he was gimpy at times, favoring his right ankle. Saban said Tagovailoa was a game-time decision against Mississippi State. He started and the Tide jumped out to a 14-0 lead on a touchdown run and a touchdown catch by Najee Harris, who finished with four TDs.

Tide defensive tackle Raekwon Davis was also taken off the field with an apparent leg injury.