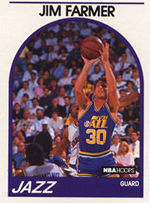 A judge in Tennessee has dropped a human trafficking charge against former NBA player Jim Farmer.

Defense lawyer Worrick G. Robinson IV says a court dismissed the charge against the one-time University of Alabama stand out on Tuesday.

Robinson says the decision came during a preliminary hearing for Farmer.

The Tennessee Bureau of Investigation says the 55-year-old resident of Franklin, Tennessee, was among 16 men arrested last month on charges of seeking sex from minors. The men were arrested during a two-day sting operation.

The 55-year-old Farmer was a leading scorer at Alabama before being picked in the first round of the NBA draft in 1987. He played in the league for six seasons with Denver, Dallas, Utah, Seattle and Philadelphia.