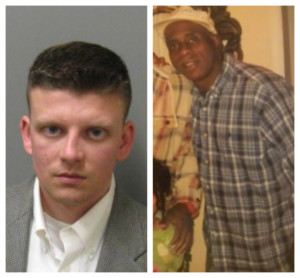 On day 4 of the murder trial for former Montgomery police officer, Aaron Cody Smith, Smith takes the stand. Smith is on trial for fatally shooting unarmed black man, Greg Gunn. Smith had been an 3rd shift officer with MPD for about 3 1/2 years.

After a brief recess, defense attorney Mickey McDermott called Smith to the stand. He asked Smith, “Prior to incident, didn’t have any animosity between anyone else?” Smith replied, “No, I did not.”

When asked did he make any changes to his original story in a second voluntary interview, he replied yes because he remembered details differently as he calmed down. Previous testimony during the trial stated that Smith was “clearly shaken up” following the shooting of Gunn.

Smith testifies he did not know who Greg Gunn was prior to that night. Smith says Gunn’s actions raised flags because as soon as Gunn saw his police SUV, Gunn began walking fast. Smith said Gunn swatted his hand and charged at him. He says he pulled his taser when he felt Gunn was escalating. Smith says he called for backup, but was not sure if he got a response.

Smith then said Gunn ran after he was under arrest for harassment.

Smith says he was trying to control Gunn with a taser during altercation, but Gunn pulled taser wires out and kept running.

Smith testifies Gunn went behind a bush, close to a porch, he heard a metallic sound but couldn’t see anything until Gunn came out with paint pole. Smith says he couldn’t remember if he tossed or dropped his baton, but felt that Gunn was going to strike him with pole, and had to get rid of baton.

McDermott went on to ask Smith, “Did you feel that your life was in jeopardy? Smith says no matter who it would have been, he would have felt threatened.

Smith says he did not shoot to kill Gunn, but shot to stop him.

Smith says Gunn swatted his hand. Smith believed that was harassment- which according to his own understanding, is unwanted physical contact, like pushing, or shoving.

He then pushed Gunn against vehicle because he wanted to make sure hands were in sight.