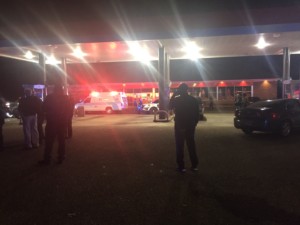 UPDATE: Shooting suspect is in custody. READ THE DETAILS

The shooting happened at the QV gas station in Downtown, Hayneville while Sheriff Williams was responding to a call.

Investigators with the State Bureau of Investigation are handling the case.

“I’m saddened to hear about Sheriff Big John Williams, who was tragically killed this evening in the line of duty. Through his service to our country in the United States Marine Corps and his many years working in law enforcement, he dedicated his life to keeping other people safe.

He will be remembered as a consummate professional and pillar of his community. I offer my prayers and deepest sympathies to his family and to the men and women of the Lowndes County Sheriff’s Department.”
Categories: Montgomery, News, West Alabama
Tags: lowndes county, officer shooting, Sheriff, Sheriff John Williams