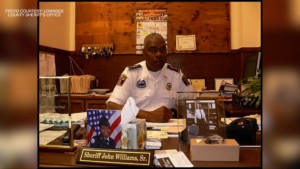 The death of Lowndes County Sheriff “Big John” Williams this weekend — continues to send ripples through the law enforcement community.

Williams was shot and killed in Hayneville — responding to a noise complaint at the QV gas station Saturday night.

Wilcox County Sheriff Earnest Evans says he worked on a lot of cases with Williams over the years.

He says they bonded while travelling on similar paths over their lengthy law enforcement careers.

Evans says they each spent decades serving as chief deputies — before moving up to become sheriffs.

“He had that thing about him, everybody came across him he was liked. He was a tall guy and he talked with a loud voice and he was just a great guy to be around all the time,” said Evans.

“He was actually a Marine at one time. And you could tell that his background was military. his uniform was always tight. He ran his ship like that. And he demanded a lot but he also gave a lot,” said Granthum.

“He would never ask his men to do nothing he wouldn’t do himself. Whoever takes his spot will have big shoes to fill.”

Williams served the people of Lowndes County as a law enforcement officer for more than 40 years.

Williams is the fifth Alabama law enforcement officer killed in the line of duty this year.

Olympics Latest: Dressel will anchor mixed relay for US

Olympics Latest: Dressel will anchor mixed relay for US