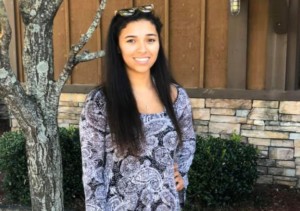 Here is an update on where the Aniah Blanchard case stands as of this afternoon. There have been many new developments.

Human remains have been found near Macon County Road 2 in the Shorter area. Lee County District Attorney Brandon Hughes says there’s “good reason” to believe the remains are those of Aniah Blanchard, the stepdaughter of UFC heavyweight fighter Walt Harris.

She was last seen on October 23 in Auburn.

Hughes says a third suspect, David Johnson, Jr., has been arrested and charged with hindering prosecution in Montgomery for his role in Blanchard’s disappearance.

Earlier this month, Ibraheem Yazeed of Montgomery was taken into custody in Pensacola, Florida, and charged with kidnapping Blanchard.

Last Friday, Antwon “Squirmy” Fisher of Montgomery was charged with kidnapping.  Court documents show that Fisher may have helped Yazeed by providing transportation and the disposal of evidence.

Blanchard, 19, was last seen on video at the Chevron gas station along South College Street in Auburn on October 23. She could be seen in store surveillance video.  The next day, she was reported missing.