A Lowndes County teenager has been arrested in a Dallas County murder investigation. 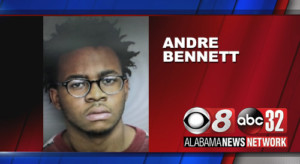 Crum was shot and killed at a house in the 700 block of Avenue A in Pine Glen Estates last month. Bennett is the second person arrested and charged in connection with the case.

Another teenager, 17-year-old Justin Manzie of Selma, is also charged with capital murder in the case, according to investigators.

Bennett is being held in the Dallas County Jail without bond.