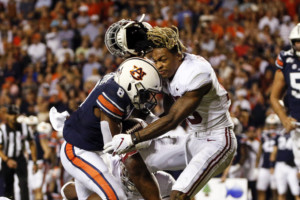 Alabama defensive back Xavier McKinney (15) loses his helmet as Auburn running back Shaun Shivers (8) runs through him for a touchdown during the second half of an NCAA college football game Saturday, Nov. 30, 2019, in Auburn, Ala. (AP Photo/Butch Dill)

Auburn has defeated Alabama 48-45 in an Iron Bowl showdown that will be remembered for years. Not only was it the second-highest scoring matchup in history, but there were a large number of crazy plays which were unusual even by Iron Bowl standards.

The biggest takeaway from the game is that it likely ended any hope that Alabama will move up in the college football playoffs.  Alabama had been ranked #5, but needed a decisive victory, plus help from other teams, in order to make it into the top four.  A loss to #15 Auburn dashes those hopes.

It was a missed 30-yard field goal with two minutes remaining that doomed Alabama, continuing the Crimson Tide’s years of woes involving its kicking game.

A combined 48 points  were scored by both teams in the second quarter, with the lead changing many times throughout the game. But a decision late in the first half put one second back on the clock as Auburn was driving, giving the Tigers enough time to snap the ball and kick a field goal. As it turns out, those three points made the difference in the outcome of the game.

One question before the game was how Alabama backup quarterback Mac Jones would perform under the pressure of playing Auburn at Jordan-Hare Stadium. He finished the day 26-39, with 335 yards, four touchdowns and two interceptions. However, both of those interceptions turned into pick sixes for Auburn. Three of his four touchdowns went to Jaylen Waddle, who also had a 98-yard kickoff return TD. Najee Harris had 27 carries for 146 rushing yards and a touchdown.

By comparison, Auburn QB Bo Nix was 15-30 for 173 yards, 1 touchdown and zero interceptions. No Auburn receiver had more than 66 yards, though running back JaTarvious Whitlow picked up 114 yards on 16 carries.

Alabama outgained Auburn 515-354, matching the Tigers on the ground but beating the Tigers through the air 335-173. However, the Crimson Tide did not a sack and only had four tackles for loss. Though the score may not show it, Auburn beat Alabama with defense, which is how the Tide have been so dominant historically.

With a victory, Auburn (9-3) improves its SEC record to 5-3, with losses against LSU, Georgia and Florida.  Alabama falls to 10-2, with losses to LSU and Auburn and 6-2 in SEC play.

(CBS Sports contributed to this report. Copyright 2019. All rights reserved)

A Cold Front Moved Through Bringing Us A Clear Weekend!

Where are the workers? Cutoff of jobless aid spurs no influx