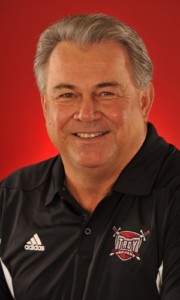 Blakeney, who retired as Troy’s head coach following the 2014 season, led Troy to 178 wins over his 24 years as head coach and guided the Trojans from NCAA Division II status to the highest level of college football during his career.

The all-time winningest coach in Sun Belt Conference history, Blakeney earned four conference coach of the year honors (two Sun Belt and two Southland), led his team to eight conference championships in 16 seasons as a member of a conference, five bowls games and trips to the FCS Playoffs in seven of eight seasons.

Johnny Williams, the Executive Director of the Camellia Bowl, and Blakeney have had football ties since the 1992 season when Blakeney was named head coach at Troy. Williams served as Troy’s Defensive Coordinator in 1992 and 1993, and then became the school’s Director of Athletics in 1994.

“I have worked for Larry, and he has worked for me,” Williams said. “We built a great team and accomplished a lot in our time at Troy. I am thrilled that the Camellia Bowl will recognize him as the 2019 Alabama Football Legend. He did a lot for football and young men he mentored during his career.”

Blakeney will be honored at the 2019 Camellia Bowl Alabama Football Legend Luncheon, which will be held Friday, Dec. 20, at the Renaissance Hotel.

Throughout his career, Blakeney was recognized by his peers, by the people he has worked for and with, and by the sporting community at large. He has been named to four separate Halls of Fame, was named Coach of the Year on numerous occasions and gives generously of his time to almost any group or organization who asks for it.

From his time as a quarterback at Auburn University, to his highly successful high school coaching career, from his 14 years as an assistant coach at his alma mater when the Tigers enjoyed an unprecedented run of success to his 24 seasons at Troy University, Blakeney always was associated with a job well done.

Blakeney led the Troy football program to an unequaled run of success that has taken the Trojans from Division II to the Football Championship Subdivision (FCS) and now to the grandest stage of all, the Football Bowl Subdivision (FBS).

Blakeney guided the Trojans to 15 winning seasons, including six seasons of 10 wins or more, and he stands third among all college coaches to have manned a sideline in the state of Alabama with 178 victories.

Prior to his arrival in Troy, Blakeney had a variety of roles in his 14 seasons at Auburn.  He began his coaching career as the assistant offensive line coach during the 1977 and 1978 seasons. That was followed by stints with the Tigers’ tight ends and wide receivers coach from 1978 until 1980, and then a focus strictly on wide receivers from 1981 until 1990.

From 1986-90, Blakeney was also the Tigers’ offensive play-caller. During that time, Auburn posted a 47-10-3 record and won three Southeastern Conference championships. They also were 3-1-1 in bowl games over that span.

Auburn had a 110-50-3 record during his time with the program, including four SEC championships and nine bowl appearances (6-2-1). In 1990, he was honored by the Chilton County Auburn Club with its “Unsung Hero Award.”

Before joining the coaching staff at his alma mater, Blakeney coached seven seasons in the Alabama high school ranks. He was the head coach at Southern Academy (1970-71), Walker High School (1972-74) and Vestavia Hills High School (1975-76). He compiled a 50-24-2 record during his time as a prep head coach.

A 1970 graduate of Auburn University with a bachelor’s degree in business administration, Blakeney was a three-year letterman at quarterback for the legendary Ralph “Shug” Jordan. He was the first sophomore ever to start at quarterback for Jordan, and Auburn played in two bowl games during Blakeney’s career. The 1968 team defeated Arizona 34-10 in the Sun Bowl, while the 1969 squad lost 36-7 to Houston in the Bluebonnet Bowl.

Blakeney was a two-sport star for the Tigers, also lettering in baseball (1968-69) while playing shortstop and third base for legendary coach Paul Nix.

He earned his master’s degree in education from the University of Montevallo in 1976.

Blakeney was born Sept. 21, 1947, in Birmingham, Ala. but grew up in Gordo where he played football, baseball and basketball at Gordo High School.

He is married to the former Janice Powell. The couple has three daughters, Kelley and twins, Julie and Tiffany.