Lowndes County residents hope for a permanent tribute to the late sheriff soon. 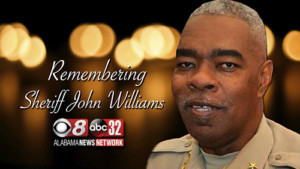 Slain Lowndes County Sheriff John Williams was laid to rest Monday,  with thousands from across the state attending his funeral.

The Lowndes County residents that will feel the loss the most are still saying their final goodbyes and hoping for a more permanent tribute to “Big John”, as he was lovingly called, soon.

Tuesday several people stopped to take pictures of the hand painted signs, posters and banners that line parts of Highway 21 in Lowndes County.

The highway leads right to downtown Hayneville where some say they’d like to see the late sheriff memorialized. “A lady told me this morning she’d like to see a statue in the courtyard to remember him by” said Cynthia Walker. Walker says she works at a convenience store, where the sheriff would stop by nearly everyday. “I think its a great idea” she continued “he served us for so many years and we all love him so much”.

Williams impact expanded outside of Lowndes County.  Reatha Williams lives in Montgomery but attended his funeral after hearing of Williams’ character and kindness from others. Tuesday, she stopped alongside Highway 21 for directions to his grave site. “I think maybe build a school in his honor would be nice” she suggested, “maybe name the jail after him, maybe name a street after him or something like that”.

Sheriff Williams, graduated from Calhoun High School in Lowndes County, though even with numerous suggestions to maybe name a school or a building or even a road in his honor, a Lowndes county commissioner says it’s a process that won’t happen over night.

Robert Harris has served on the County Commission for nearly 20 years, and says he knew Williams for more than twice that long. “We want to try to make sure that we do right, and we do it like Big John would want it… decent and in order” he said of the proposed memorial possibilities.

Changing a street name for example, is different in each count, but typically it starts with a petition, then filing of paperwork, and then a wait for final approval.

The Lowndes County Commission will hold its first meeting since Williams was laid to rest on Monday December 9th.

Just a week after Williams’ funeral would be too early to outline any concrete plans for memorializing the beloved sheriff, but Harris says it’s not too early for input. In fact, it’s encouraged.

“I just want people to share their ideas, share their thoughts with us…call the office” Harris explained “and we will take in account all of those ideas and we’ll do our best to make the best decision possible”.