The city of Selma is one step closer to announcing a new police chief. The selection committee has now narrowed the search — down to three finalists. 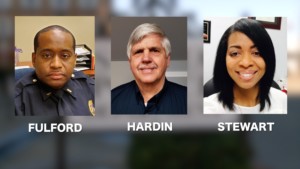 Lt. Kenta Fulford of the Selma Police Department — former Butler County Sheriff Kenneth Hardin — and Dr. Stephanie Stewart from the Department of Pardons and Paroles — are in the running to become the city’s next top cop.

So, we went out and asked people around town — “What qualities — they’d like to see — in the next chief of police?”

“I’m just hoping and praying that they hire somebody that’s tough on crime — and can lead the police department they way it should be led,” said Rickie Brown.

Residents said leadership skills — and experience — were essential qualities for the job.

“It should be someone who definitely has the qualifications to be a police chief. You know, someone who has the experience from past experience. That’s what we should be looking for. Someone whose proven them self,” said Furlonia Davis.

“We need someone in the police department that’s going to bring the police officers back together and be community oriented — and going out and being able to police without a whole lot of controversy,” said Henry Hicks.

Another top priority for residents was having a chief who cared about the community.

“I would love to see somebody that’s invested in our community — that cares about Selma. That wants to see Selma grow — and see Selma prosper,” said Bonnie Blackmon.

Council President Corey Bowie says the committee is planning a meet and greet — to give the community an opportunity to meet the three finalists.

Bowie says the council should choose the new chief — by the end of the month.

Wilson says emotions won't get to him in return to Seattle