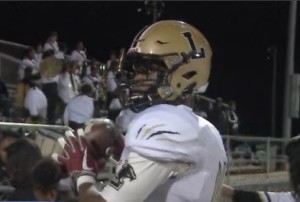 At the time of his selection, the 6-foot-2, 210-pound senior quarterback and safety had led the Panthers to a 13-0 record and a berth in the Class 1A state championship game against Mars Hill Bible High. Story passed for 2,677 yards and 31 touchdowns in addition to rushing for 1,068 yards and 15 scores through 13 games. A three-time First Team All-State honoree, he entered the title game with a state-record 171 total touchdowns and 12,947 yards of total offense, 10 yards shy of the Alabama record.

Story has volunteered locally at a nursing home and as a youth football coach in addition to donating his time to multiple community service initiatives through his church youth group. “Kristian is the kind of player that is hard to defend,” said Buster Daniel, head coach of Valley High. “He prolongs plays with his feet, gets out of the pocket and throws the ball downfield, or he just out-thinks you. He’s a complete player.”

Story has maintained a B-plus average in the classroom. He has verbally committed to play football on scholarship at the University of Alabama next fall.

As a part of Gatorade’s cause marketing platform “Play it Forward,” Story has the opportunity to award a $1,000 grant to a local or national youth sports organization of his choosing. He is also eligible to submit an essay to win one of twelve $10,000 spotlight grants for the organization of choice, which will be announced throughout the year.

The Latest: No masks: Pope, Spanish PM meet at Vatican