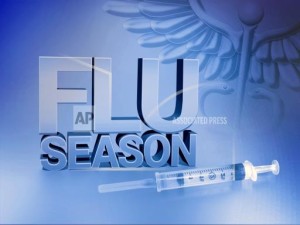 Flu season is now underway for most of the United States. It’s the earliest start in more than 15 years. Federal health officials have released their first case estimates.

The southern states are the hardest hit right now and flu B viruses are dominating.

Dr. William Schaffner from Vanderbilt University Medical Center says, “That’s a bit odd because the influenza Bs are usually more active at the end of the season. Here we are at the beginning. We don’t know why that is, but it’s noteworthy because influenza Bs like to affect children.”

The CDC estimates, so far this season, there have been as many as 2.5 million flu illnesses, 29,000 hospitalizations, and 2,400 deaths nationwide. 12 states and Puerto Rico are now experiencing high influenza-like illness.
The states are: Alabama, Georgia, Louisiana, Minnesota, Mississippi, Nebraska, Nevada, New Mexico, South Carolina, Tennessee, Texas, and Washington.

Doctors say now is the time to get your flu shot if you haven’t been vaccinated. “Please run, do not walk,” says Dr. Schaffner. He adds “Get your vaccine as quickly as possible. You know it takes 10 days to 2 weeks for your body to make your full protection. We all know that the influenza vaccine is not a perfect vaccine. But remember this, even if you get vaccinated and get the flu, you’re much less likely to have the severe complications, pneumonia, hospitalization, and dying.”

While some are concerned that an early start could mean we’re in for a tough season, experts say it’s too early to make any predictions. Health officials say it’s possible the flu season could also peak much earlier than normal.