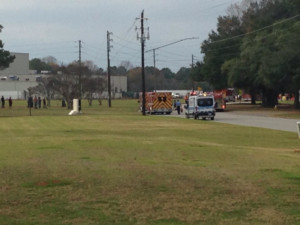 Montgomery Fire/Rescue is on the scene of a hazmat scene in the 2700 block of Gunter Park Drive.

Fire officials say 11 people were treated after a chemical reaction occurred at Kinpak, Inc., a manufacturing facility in Lagoon Park. Three of those were transported to local hospitals for non-life threatening conditions.

Capt. Jason Cupps says the chemical reaction occurred when hydrochloric acid and phosphoric acid accidentally came in contact with each other. The building was evacuated. No fire personnel were injured.

Montgomery Fire/Rescue Specials Ops is working to lessen the situation.

Fire officials say the public is not in danger, but they are asking people to avoid the area for the time being.